A Bonnie and Clyde Musical-but not the first 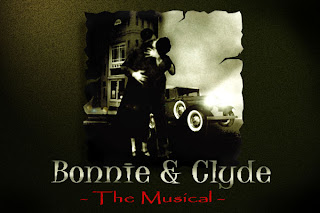 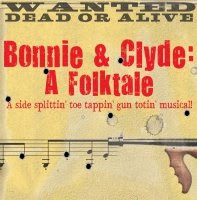 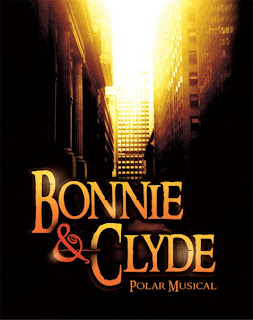 Playbill.com announced today that the musical version of BONNIE AND CLYDE will debut at La Jolla Playhouse this fall. I clicked on the headline because I knew of a version that had been written by a graduate of my alma mater, Hunter Foster. I was curious to see what this was.

Turns out this is one I wasn't aware of: this one is by Frank Wildhorn. Wildhorn is best known for JEKYLL & HYDE, which ran for four years on Broadway. He is also responsible for DRACULA, THE SCARLET PIMPERNEL, and THE CIVIL WAR-none of which fared as well. (Indeed, Jekyll and Hyde probably should have quit while it was ahead. In a desperate attempt to keep the production alive David Hasselhoff was cast in the title role and filmed. The tag line "This is no day at the beach" pretty much tipped everyone off that this monster was done with its Broadway run.) Nonetheless, JEKYLL AND HYDE is frequently performed regionally, and many of Wildhorn's works that have yet to make it to the US have found great success overseas.

So now Wildhorn has created BONNIE AND CLYDE, a musical version of the classic Warren Beatty and Faye Dunaway film telling the true story of a couple that terrorized through crimes. In the Playbill article, Wildhorn is quoted as saying:

"When I started working on this show, no one was talking about Bonnie & Clyde. Now, two new books have been published, a remake of the Warren Beatty/Faye Dunaway classic film is in production, and the FBI recently released close to a thousand pages of classified memos on the infamous couple...Clearly, they are once again piquing the interest of a troubled America. This has been a musical challenge unlike any I've known before. These are the most incredible and intriguing characters I've given a musical voice to."

That's great Frank. But to say no one was talking about Bonnie and Clyde isn't entirely true. Apparently this infamous couple's exploits have inspired no less than four other musical adaptations.

The one I knew about was the one written by Hunter Foster and Rick Crom. This one appeared in 2008 at the New York Musical Theatre Festival and is billed as "a side splittin' toe tappin' gun totin' musical". This adaptation seems to be of the lighter sort-a folktale with an emphasis on the fun of the time and place. I had heard that Foster was working on this show back when I was at U of M, and so it appears it has finally come to fruition only a year ago. The current version uses 14 actors.

The second, written by Bernard Poli and Simon Porter, French composer/lyricists. Their version is clearly much more on the dramatic side, with intense orchestral accompaniment and a cast of only 6. From what little I've heard, it sounds a bit Andrew Lloyd Webber like in style. This production does have a cast recording (recorded in English) but has apparently never been staged. My google translator didn't do a great job but from a French website I (think I) read that this will be staged in Russia in 2010 for the first time. Oddly enough, from that article I found out about another version...

Raphael Bancou's version will be presented in France in the summer of '09 at the Theatre de Beliers in the Festival off Avignon. The French version of the story features book, music and lyrics by Bancou. The director of the 2009 production will also direct the above mentioned Poli version in Russia in 2010. So apparently there are no hard feelings between these European composers.

Finally, there is "Bonnie and Clyde: The Two Person, Six Gun musical", which is represented by Colorado's professional Summerwind Productions. This version was created by Will Pomerantz, Andrew Phillip Heron and Doug Ritchie. As you may have detected from the title, this is a two person version of the story. It has been produced in Seattle, WA and has a production pending in Alberta, Canada. The show seems to have been through several incarnations, including a disastrous one in Chicago...and is just now finding its audience.

And we thought The Wild Party was an unfortunate coincidence...

So there you have it, Mr. Wildhorn...you are actually number FIVE to attempt this...and there could be more. I need to go back and watch the film, but it seems that Bonnie and Clyde is appealing to composers because it plays on so many different themes: Love, crime, comedy, drama, suspense...cram them all into one tale and it would be fairly natural to musicalize.

I'll be interested to see how Wildhorn's turns out. There was an industry reading produced by The Roundabout THeatre Company, which featured another Michigan alum, Brynn O'Malley. No doubt that in the final version there will be some very poppy songs, perhaps with some stylistic flair. (The press release describes the score as a "non-traditional score, combining rockabilly, blues and gospel music." I'm also confident that there will be a large ensemble of unfortunates that Bonnie and Clyde meet along the road. And a full orchestra. Having seen zero of these musicals I'm in no position to comment on what works and what doesn't...but I'm sure the answer will come in time.

Bonnie and Clyde at the New York Musical Theatre Festival

Bonnie and Clyde-The Musical by Bernard Poli and Simon Porter