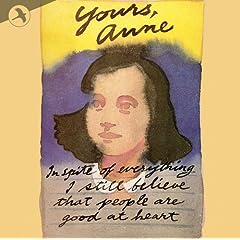 It's true. There is a musical version of The Diary of Anne Frank. I have gotten some pretty priceless reactions when I've told people that my theatre will be doing this next year (one friend almost spit out his wine). But hold the skepticism if you will, and think about it. I did a post not long ago about odd topics for musicals. You can read it here. But the gist is that dark subject matter has made for some wonderful and even popular musicals...but when you look at the subject matter on its own it sounds odd.

The musical is called Yours, Anne. I absolutely adore the music from it. The show openly admits to being based on the famous play by Frances Goodrich and Albert Hackett, as well as on the diary itself. Recently I had a conversation with a professor at the center for Jewish Studies here in Madison, Wisconsin at the University of Wisconsin. She has written about Anne Frank and is quite passionate about the story. Her first question for me, about 60 seconds into the conversation, was "Is it sugary?" She went on to elaborate on the fact that she is often disappointed by adaptations of Anne's story because of the way she is portrayed...basically as an eternal optimist. She alerted me to the criticism the famous play (which was the basis for the movie adaptation) has received over the years: It takes the historical context mostly out and focuses on Anne as an inspirational character.

In case you aren't familiar with the details of the Anne Frank story: She was a German Jew living in the Netherlands at the time of the Nazi occupation. Her father owned a spice factory, but when the Nazis started seizing Jewish businesses, her father transferred ownership to an Austrian gentile friend. In 1942, when things were getting worse and more Jews were being deported, Otto Frank, Anne's father, arranged for the family to go into hiding. They went sooner than planned when Anne's sister Margot was summoned to a work camp. Their hiding place was behind her father's office building in what Anne called "The Secret Annex". They lived with another family, the Van Pels family (called the Van Daans in the diary and dramatic adaptations) and a dentist named Fritz Pfeffer (known in the diary as Mr. Dussel). While there, Anne kept a diary. The diary is remarkable because her transition from girl to young woman is extremely obvious, especially as she accepts the reality of what is going on in the outside world. First the issues at hand are those typical of a teenager: Worrying about physical appearance, boys, movie stars...but as she grows up she learns to analyze her surroundings and the people she lives with with a very unique precision. Her last diary entry was August 1, 1944. The Secret Annex occupants were arrested on August 4, 1944. All were sent to Auschwitz-Birkenau and then to various concentration camps around Europe. Anne died in the work camp Bergen-Belsen in April of 1945, a month before the camp was liberated. Of the occupants of the Secret Annex, only Otto Frank survived. He returned to find Anne's diary saved by a family friend, and had it published. It has since been translated into 67 languages and, next to the bible, is the most widely read non-fiction book in the world.

Any dramatic adaptation of the story should be a window to the historical context, and it must never be forgotten that Anne suffered a horrific fate, as did millions of others like her. To portray Anne Frank as an eternal optimist and an inspiring literary figure is incorrect. Through the years Anne Frank has become a commodity, and her story of a brief romantic affair with Peter Van Pels, one of her co-hiders, has become the selling point for the book and movie. The movie trailer paints it as a romance!
Goodrich and Hackett, who won countless awards when it debuted on Broadway, but drew criticism from some for it's sugar coating the story. Meyer Levin, an author of the time, maintained that his version of the Anne Frank story, which he had shopped to producers, was phased out in favor of making the story less "Jewish". Oddly enough, Otto Frank supported that idea, telling Levin he did want it to be "a Jewish play".

Yours, Anne incorporates some of the optimism found in other adaptations. However, the underlying musical quality sets the tone for a much darker storyline. With only spoken lines on the page it can be harder to convey impending doom. However, the haunting songs from Yours, Anne give a sense of the danger that awaits the residents of the Secret Annex. Good music heightens the story it is telling, and the music in Yours, Anne does just that: It adds another layer to an already stirring story.

As I've discussed before, its all in the execution. The libretto of Yours, Anne leaves room for the actress playing the title role to go either way with the character. I will direct our theatre company's production, and it is my hope to help our actress make Anne into a fully realized and flawed individual, much like she really was. I do believe that the music captures the mood very effectively, and truly embodies Anne's remarkable personality. I look forward to making this show one that can reach everyone but also one that does not discount the historical context.
Posted by Meghan at 1:47 PM